We'll Toast To That

No surprise at the unique libations coming out of DC Area distilleries, bars, and restaurants:

Atlas Brew Works
Atlas Brew Works is opening a third location, slated for a late-2023 opening in the new Carlyle Crossing mixed-use development in Alexandria, Virginia. The new location features a tap room with 16 draft lines, a patio, and a large kitchen. Atlas Brew Works is soon releasing its seasonal IPA, The Precious One. The popular apricot-infused IPA will be available in both tap rooms and throughout the market on Wednesday, February 1. atlasbrewworks.com

NEW:  Crooked Run Fermentation
Crooked Run is the first brewery to open in DC’s Union Market District and is a celebration of the art of brewing and fermentation without pretension. A collaborative concept between Crooked Run Fermentation owners Jake Endres and Lee Rogan and Michelin-starred Chef Chris Morgan and The Kitchen Collective team, the light-filled space features an array of craft beers brewed onsite, as well as artisanal, personal pan pizzas created by Chef Chris and award-winning “Pizza Czar” Anthony Falco (formerly of Roberta’s). They have also released Skilletized imperial milk stout made with coffee, hazelnuts, vanilla beans, and maple syrup is a big breakfast stout brimming with flavors of french toast, coffee, and chocolate. If you’re going dry this January you can still enjoy food and FREE entertainment like karaoke and more. And lastly, their Sticky Rice beer is now available at all three locations on tap and by the can. This beer is a Berliner weisse with mangos, coconut, and rice milk. 22455 Davis Drive; crookedrunfermentation.com

Gatsby (Bottomless Dinner Alert)
Gatsby is kicking off a bottomless dinner where you can enjoy 90 minutes of free-flowing drinks along with dinner. From twists on classic cocktails like a chai white russian to Greta’s Punch and NY Sours. Bottomless will be $38.99 per guest and requires the purchase of one entree and the entire table has to participate. 1201 Half Street Suit #205; 202.817.3005; gatsbyrestaurant.com

Guinness
The Guinness Open Gate Brewery in collaboration with Diageo's PAN Network has released Yuzu to the Moon in honor of Lunar New Year. The rice lager (4.5% ABV) made with Jasmine rice and yuzu fruit is available on draft and in to-go cans at the brewery while supplies last. Proceeds of the beer sales will be made to the creatives at Baltimore’s Asian Pasifika Arts Collective, a nonprofit organization that uses art to advocate representation of Asian Americans and Pacific Indigenous Americans. 5001 Washington Boulevard; guinness.com

NEW:  L'Ardente (Mixer Moves)
L'Ardente has welcomed longtime D.C. beverage expert and restaurateur Micah Wilder to serve as Director of Beverage at Unconventional Diner and L’Ardente. Wilder brought with him two bar leads who worked under him at his beverage consulting company, Boom Daddy Hospitality, installing Ian White to serve as Bar Manager at Unconventional Diner and Hunter Douglas in the same role at L’Ardente. Enjoy cocktails on their new revamped menu like the old fashioned, UD hot cider, and more. 200 Massachusetts Avenue NW; lardente.com

NEW: Pisco y Nazaca
Pisco y Nazca has launched three new Pisco Sour flavors that you can sample on their limited-time Valentine’s Day flight. Offered throughout the month of February, these new flavors include Strawberry, Raspberry, and Blackberry. For each flight sold, $1 will be donated to the American Heart Association. 1823 L Street NW; 202.559.3726; piscoynazca.com

The Roost
Get a sneak peek of Show of Hands, DC's newest craft cocktail and wine bar at The Roost. Spirits Director, Nick Ferrell, has created a menu featuring low-alcohol drinks and a selection of wines by the glass. 1401 Pennsylvania Avenue SE; 202.661.0142; theroostsedc.com

Tiki TNT (Happy Hour Alert)
Tiki TNT is helping you extend your weekend one more day with a Monday Happy Hour. Cocktails begin at just $7 and beers for only $5, and enjoy um-soaked House-Specialties like the Passion Fruit Daiquiri or the classic Thrasher’s Rum Mai Tai. 1120 Maine Avenue SW; 202.900.4786; tikitnt.com

SHARE ON
Tweet
previous article
Dishes That Warm You Up
next article
Can the The Coronavirus Aid, Relief, and Economic Security Act (Cares Act) Save Independent Restaurants? 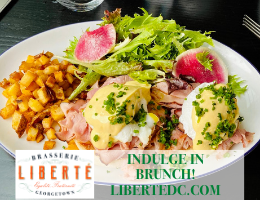